Purpose
There are numerous references in the scientific literature to energy healing practices and cancer in humans, the majority of which involve complementary or palliative care. There are some references to direct local healing practices in cancer treatment in patients or, rarely, in the laboratory. However, there are few studies about distance healing in the laboratory. We undertook several preliminary experiments to examine the effects of distance healing on the growth of human cancer cells using a unique energy healing practice developed by Mr. Li, which he calls Multi-Dimensional Unified Universal Energy (MDUUE). Briefly, this healing practice utilizes concepts of invisible energy (that Mr. Li believes are high performance, high intelligence invisible energies of Nature and Universe), and manifest energy. In a manner similar to David Bohm’s concepts of the Implicate and Explicate Order, these invisible and manifest energies ultimately influence and produce matter that we see dimensionally. Mr. Li theorizes that manipulation of MDUUE can alter the primary energy structure or condition of matter, which could promote healing. These experiments were undertaken to examine the effects MDUUE practice might have on cultured cancer cells.

Experimental Design:
Two human cell lines were used. AR(C) is a human Ewing’s sarcoma cell line established and described by the author (JN) in 1985 and is known to be resistant to chemotherapy. These cells are serially passaged after trypsinization and grown in Dulbecco’s MEM with 10% fetal calf serum (FCS). This cell line grows attached to the bottom of flasks or plates. UT-7 is an erythropoietin (EPO)-dependent human leukemia line that grows in suspension culture. This line is serially passaged by dilution in Dulbecco’s MEM with 10% FCS and 0.5 U/ml EPO. Both cell lines were maintained prior to an experiment by serial passaging in large flasks and cryopreserved aliquots were used for separate experiments. During the experiments, AR(C) was grown in 6-well tissue culture plates and UT-7 was grown in small flasks.

Experiment Series #1 was designed to compare the growth of AR(C) in a treatment incubator versus a control incubator, physically separated in different rooms of the same building in Pennsylvania. Cells were planted 2.5 x104 cells per well in 10 ml. of media in each well of 6 well plates. Five sequential experiments were performed and results of both incubators are presented on a time line in graph form below:

Experiment Series #2 was designed to determine if the human leukemia cell line, UT-7, could be similarly affected. Cells were grown in flasks, each containing 4 x 104 cells in 20 ml. media. All experiments were set up in an identical fashion.  Four flasks were arranged in each of 2 incubators.  A top shelf contained 1 flask in the back left (1A) and 1 flask in the front right (1C).  A mirror was placed on a shelf immediately below the top shelf.  A middle shelf (2C) and a bottom shelf (3C) each contained a flask in the front right.  The treatment incubator was our former control incubator and the control incubator was borrowed from another investigator with the promise that we would use no energy treatments on that incubator.  Cells were directly counted from the suspension using a hemocytometer chamber, every 1-3 days.  Every 7 days 10 ml of each suspension was removed and added to another 10 ml of fresh media/EPO, again bringing the total volume up to 20 ml.  Three sequential experiments were performed.  Again, two pre-treatment studies showed both incubators had identical growth.  In the third study treatment began immediately after planting the cells.  Although we knew which incubator was being treated, the observer did not know the nature of the treatment or the flasks being treated.  The results of the treatment experiment are graphed below.

Results
Experiment Series #1 showed the pre-treatment cells grew identically in both incubators.  With treatment, however, the cells in the upper shelf grew significantly slower and eventually those cells in position 1C all died.  The post-treatment repeat experiment at chronological day 105 showed ongoing failure of growth in position 1C, although all other positions returned to normal.  Even after moving the incubator, the experiment at chronological day 190 continued to show an effect at 1C.  These experiments demonstrated three findings.  First, non-local MDUUE appeared to have a dramatic effect on the growth, and possibly viability, of AR(C) on the upper treated shelf of the treatment incubator as compared to the controls.  Second, there appeared to be morphologic changes, such as multiple nucleated cells in the treated plates.  Third, over time the effect waned except for one location (1C) that maintained a dramatic suppression of cell growth over time regardless of physical location of the incubator or cell type tested. 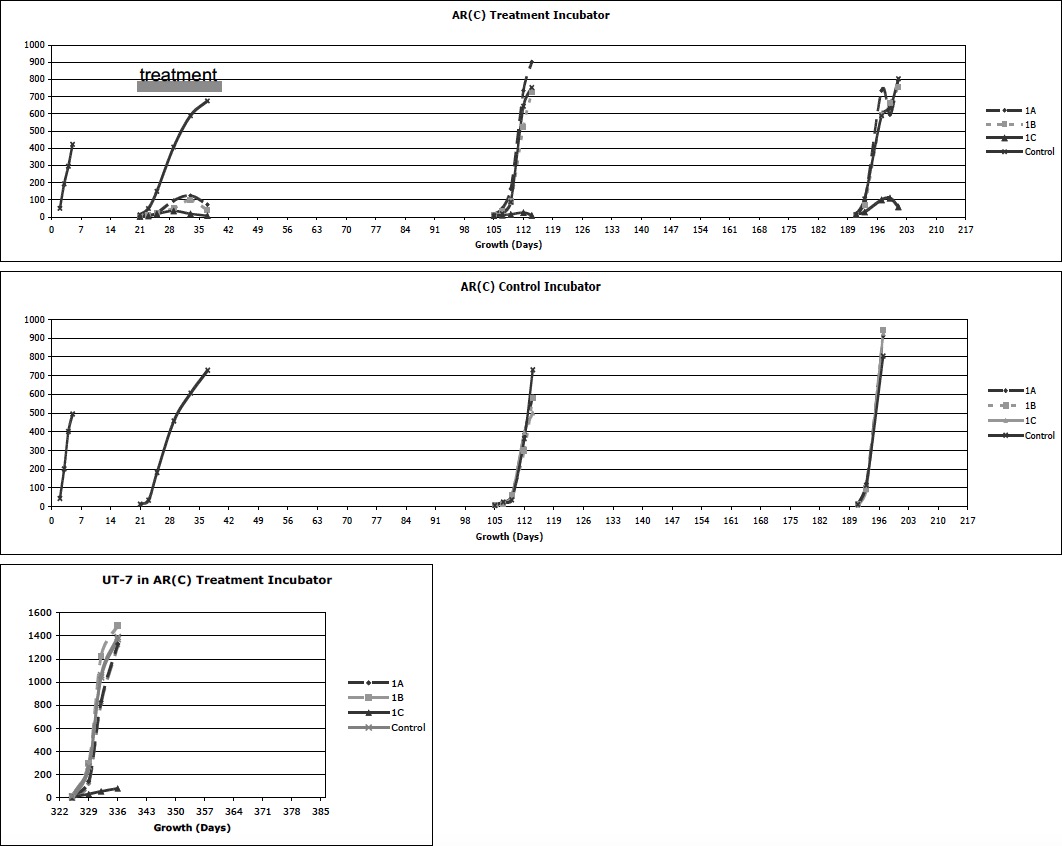 Discussion
These results are promising in that, with two different cell lines and two different experimental conditions, there were clearly different growth observations between groups in the treatment incubators and the control incubators.  These experiments bear replicating, both in our lab and in other labs.  It will be important to replicate these effects to offer validity to the results.  Also, the biologic mechanisms by which the cells are altered in growth or die will help, in turn, to explain the effects of MDUUE.  For example, in the first set of experiments one could look at the cell kinetics of growth and possible mechanisms of death such as apoptosis.  There is also the residual effects of the treatment incubator in the first experiment that can be studied.  The second set of experiments offer other possibilities in addition to those mechanisms already mentioned.  For example, the decreasing size of the cells in the groups that showed no growth is reminiscent of the usual maturation of erythrocytes.  I addition to studying programmed cell death (apoptosis) one could look at surface markers for maturation.  There are clinical examples of other leukemias, such as promyelocytic leukemia, that can be driven to benign maturation through drug therapy.  This opens the possibility of using MDUUE by itself or as adjuvant therapy in human malignancies.

There are however several barriers, from practical and scientific aspects, that makes definitive study of this phenomenon difficult.  First, our experience is that, once used, incubators may become unusable for other experiments.  Incubators are expensive and, for obvious reasons, other researchers are reluctant to “loan” incubators.  Unless one has resources to purchase and run several incubators at once, experiments are time consuming, expensive, and difficult.

Also, from a scientific method standpoint one could look at improving controls and whether it would be possible to better randomize and blind the studies.  It was difficult to predict the proper controls, many of which needed to be historical.  In the first set of experiments we did not do a control that exactly replicated the treatment conditions, frankly thinking that any area of an incubator should grow cells in the same manner.  Thus our control was in a single spot in both incubators.  In retrospect we have no way of knowing whether area 1C ever grew cells normally, although they grew normally in the control identical incubator.  It was also difficult to carry out a true blind trial.  Although the flasks/plates were randomly chosen and placed, the specific location of the plates were known to all and we knew which incubator was being treated.  In the second experiment, although Mr. Li treated specific flasks, these were not specified and recorded prior to the treatment. In addition Mr. Li requested feedback on cell count data to help him observer and adjust treatment; a reasonable request, but it was not possible to blind the results for either the treating person or the observer.  Many of these issues bring forth the difficulties in performing experiments of these types under currently expected scientific methods and speak to looking for new paradigms for experiments and interpretations. 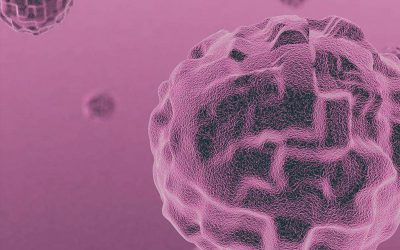 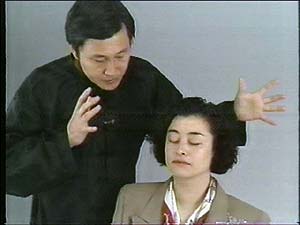 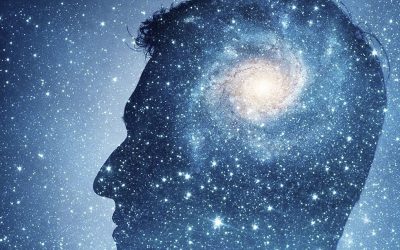